With two other media professionals, Mr. David Cascaro, the director of Haute école des Arts du Rhin and Ms. Dina Oganova, an award winning Georgian photographer, she made a preselection from among the two thousand photos entered into the competition  through Instagram on the basis of their quality and relevance to the chosen theme: Making Europe.

Karoliina also attended the Commemorative Ceremony for the 70th Anniversary of the Council of Europe at the Strasbourg Opera House on October 1, 2019. The keynote speaker of the event was the President of the French Republic Emmanuel Macron.

More information on the photo competition and the winning images can be found here. 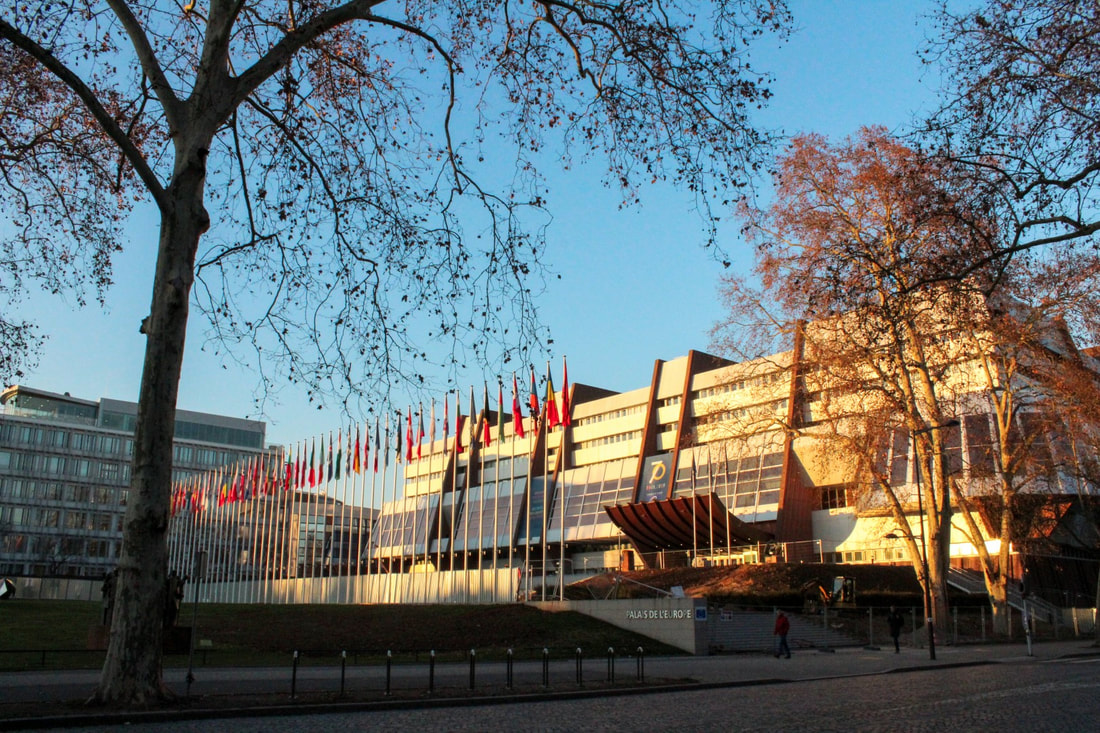 The Council of Europe in Strasbourg, France. Photo by Karoliina Veijo.

In addition to creating art depicting architecture, parks and gardens, Karoliina enjoys capturing live gigs. She has photographed and shot video clips of bands like Musta paraati, She Past Away and Nolla Nolla Nolla. 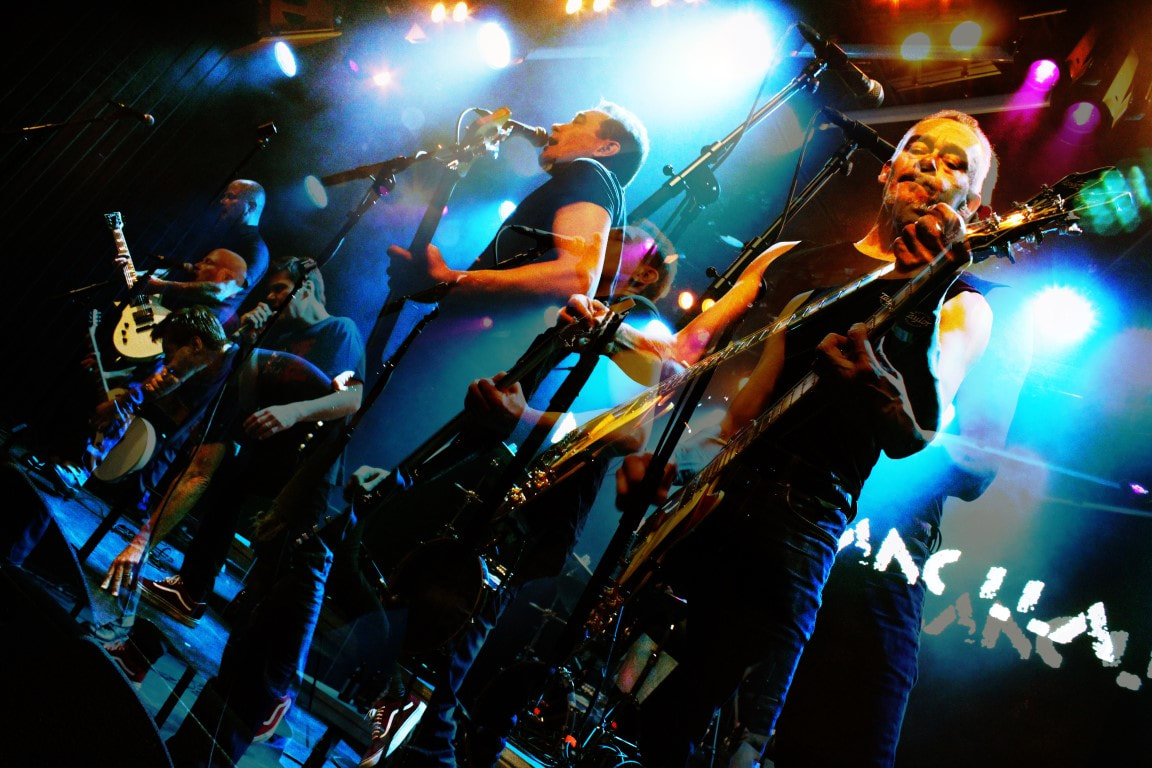 The legendary punk band Nolla Nolla Nolla celebrating their 40th birthday at On the Rock's, Helsinki on Nov 29, 2019.

THE 'A HUNDRED YEAR TIME HOP' EXHIBITIONS IN STRASBOURG IN 2019

Karoliina created an art advent calendar for 2018. The free and colorful digital calendar can be found in Facebook.

ABOUT KAROLIINA & HER ART

Ever since Karoliina was ten she has been holding a camera and clicking away through travels, birthdays and events.

In the times before digital cameras, her main subjects were people and important occasions of life. The camera was a memory-making-machine.

Karoliina still loves to photograph people and to capture their beauty and energy into portraits, but already from the beginning of her photography artist days, round 2010, architecture and it's relation to nature have been her main subjects. Karoliina thinks that buildings have a lot of character, much like humans do, so she often calls her works architectural portraits.

Karoliina has studied graphic design, audiovisual media production and songwriting. The collage below combines, in a way, all those. The band shots are from January 2019 when Karoliina photographed the Finnish post-punk / goth-rock band Musta paraati's gig at Sellosali, Espoo. Music is very important to Karoliina and capturing the energy of bands and artists in photographs builds a bridge between the different forms of audio and visual arts. The white vertical lines are a recurring graphic element within Karoliina's art.

'Musta paraati I'. The collage by Karoliina consists of shots of the band and the snowy Sibelius Park.
Share

In 2009 Karoliina travelled to New York for the first time. That city totally stole her heart. New York felt like home to her. During that two week stay she captured all New York material that can be seen on these pages. The Big Apple woke the inner pop-art-artist in Karoliina.

In her early works she has been very true to the authenticity of a photograph. The framing of each image is as it was when the shots were taken. Only the colors have been adjusted to bright pop-art pinks, whites, violets, yellows and oranges.

THE PALACES of POTSDAM

In 2011 another city stole Karoliina's heart; the castle town of Potsdam, near Berlin, Germany. She only spent there a day and has been wanting to go back ever since. The presence of history is very evident in Potsdam. It used to be the place where the emperors spend their summers.

As an artist, Karoliina felt an urge to show more in a picture, to add the element of time passing and light changing, the viewpoints altering. That's how she expanded her expression towards layering and transparency. Many of Karoliina's works after that have been photo collages. Most of her layered works are also horizontally symmetrical, which creates a rather decorative impression. 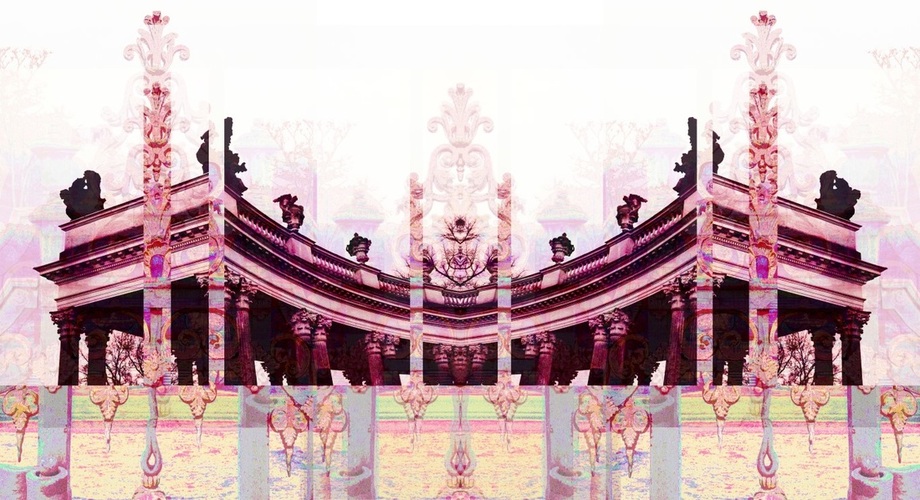 FROM HANKO TO THE NEW WORLD - LAYERED HISTORY

In 2013 Karoliina created a series of emigration themed pieces in co-operation with the Hanko Museum. The collection is called "From Hanko to the New World". The idea to work with the museum's old black and white archive photos came from the curator of the project, gallery owner and art consultant Eeva Pinomaa.

The collection of 21 images tells the story of the Finnish emigrants and illustrates their voyage to the new world. The works approach the subject from an artistic, not strictly historical, point of view. The works were first seen during FinnFest 2013 in Houghton, Michigan, USA.

In 2015 the series was at display at the Institute of Migration in Turku Finland. That year Karoliina also received a "From Hanko to the New World" related grant from the Institute. Since then the works have been at display at the Hanko Fotofestival, Hanko Museum, Finland Society and the 20th Jubilee Session of the Finnish Expatriate Parliament.

​You can see all 21 images on the artworks page. 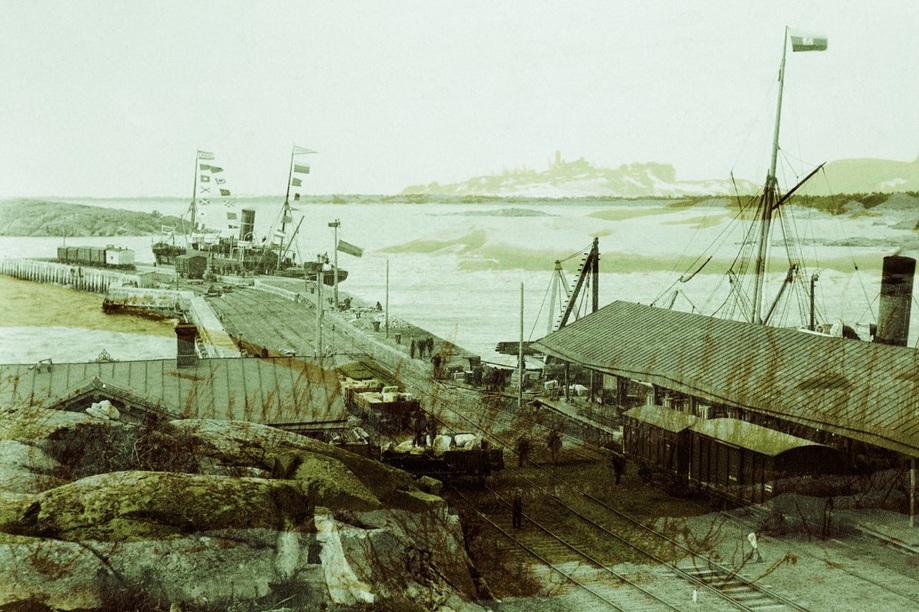 "From Hanko to the New World - The Harbour"

Karoliina has been capturing the Sibelius Park in Helsinki for many years and during 2014-2015 she created a vast collection of colorful artworks based on  those shots. In co-operation with fellow photographer Johanna Sandin she put together 'Fairytale Forests - Sibelius Park & Ainola' and 'Hanko - The Serious Sea' project.

The collection includes Karoliina's works of the Sibelius Park and Johanna's photos depicting Ainola, home of the Finnish national composer Jean Sibelius as well as her selected shots of the cool shorelines of Hanko. The project was awarded grants by The Swedish Cultural Foundation in Finland and The Hanko Savings Bank Foundation. Veijo & Sandin's exhibitions were a part of the official 'Sibelius 150 years' program.

The Sibelius Park works are layered, symmetrical images in which the park has turned into a colorful fairytale forest. Especially the 'The Mist' series has been said to remind the paintings of the German artist Caspar David Friedrich (1774-1840) and indeed, there are many similarities: the romantic colors, the silhouettes of the trees and the reduced role of human beings. 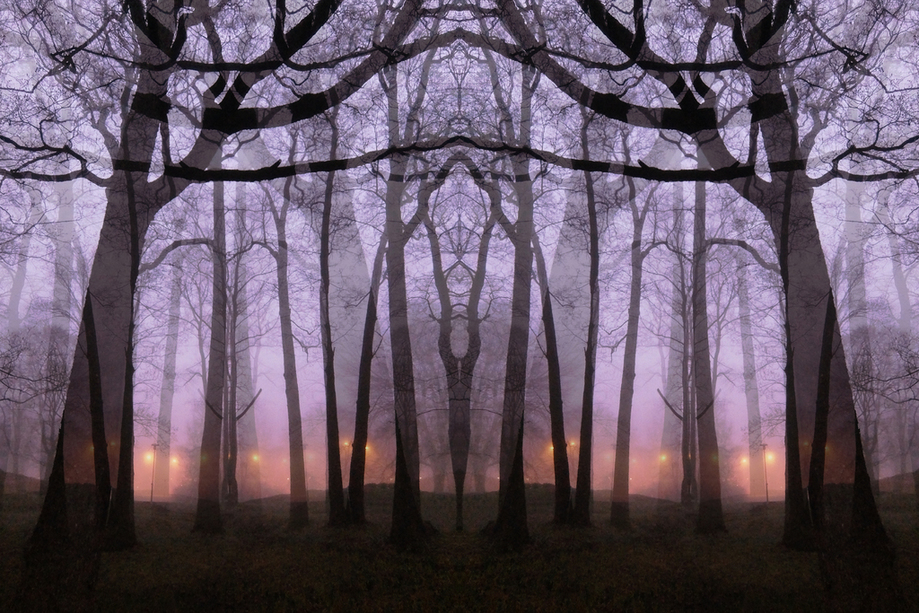 JEAN AND AINO IN THE GARDEN

After Karoliina's trip to London in 2015 she tuned down the use of pop colors and did some very realistic pieces, colorwise that is. Many of those works are layered. She also experimented with different visual styles.

Karoliina created a series of 24 London themed images and published them as a digital art advent calendar (event) on her Facebook pages at fb.com/KaroliinaVeijoArt.

Here are some of Karoliina's thoughts regarding visual expression and the authenticity of photos.

"Sometimes a layered image captures the 'truth' and essence of a place or an event more presicely, than a single still shot. In many ways layered images, such as the 'Trafalgar Square at Night', can be more accurate in depicting one's experiences and memories, than a traditional, documentary photo. There is a sense of energy and movement in this piece, and at a hectic place, like the Charing Cross roundabout, that is essential, and at least to me, my strongest memory of that particular location. Through this artwork I can go back to that place and time and remember, on a more emotional level, how I felt when I took these shots. I find the questions regarding the authenticity of a photo versus one's memories and emotions related to the captured moments and places very interesting in general." 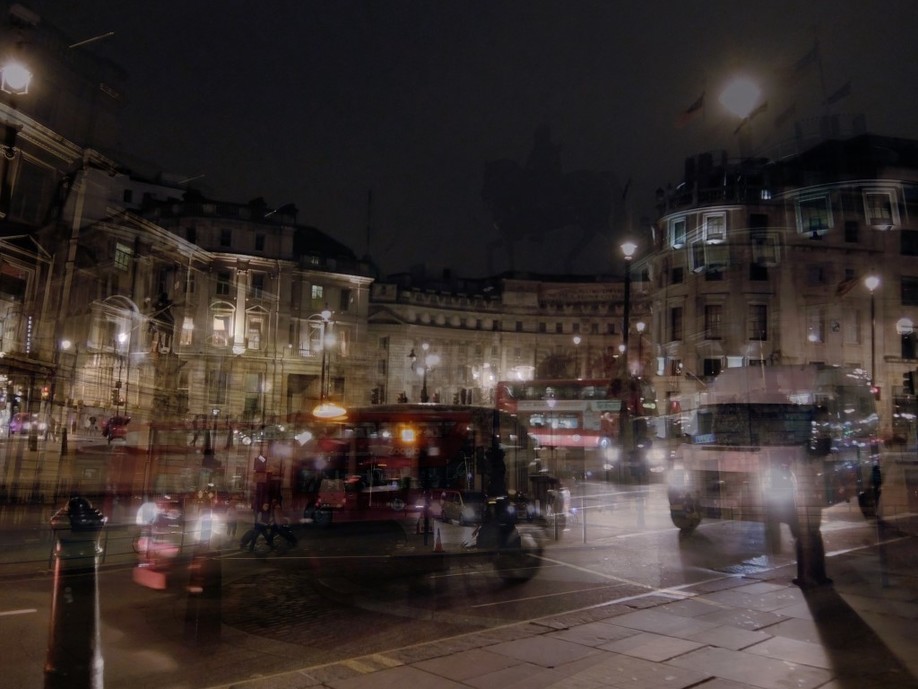 SUNSHINE aka FLORIDA & THE BAHAMAS

Karoliina is currently working with photos taken in Florida and The Bahamas. While some of the works bear resemblance to her earlier pieces in terms of strong coloring and symmetry, she has also explored some totally new waters. These works can be seen later in 2020. Here is a little tasting from Nassau. 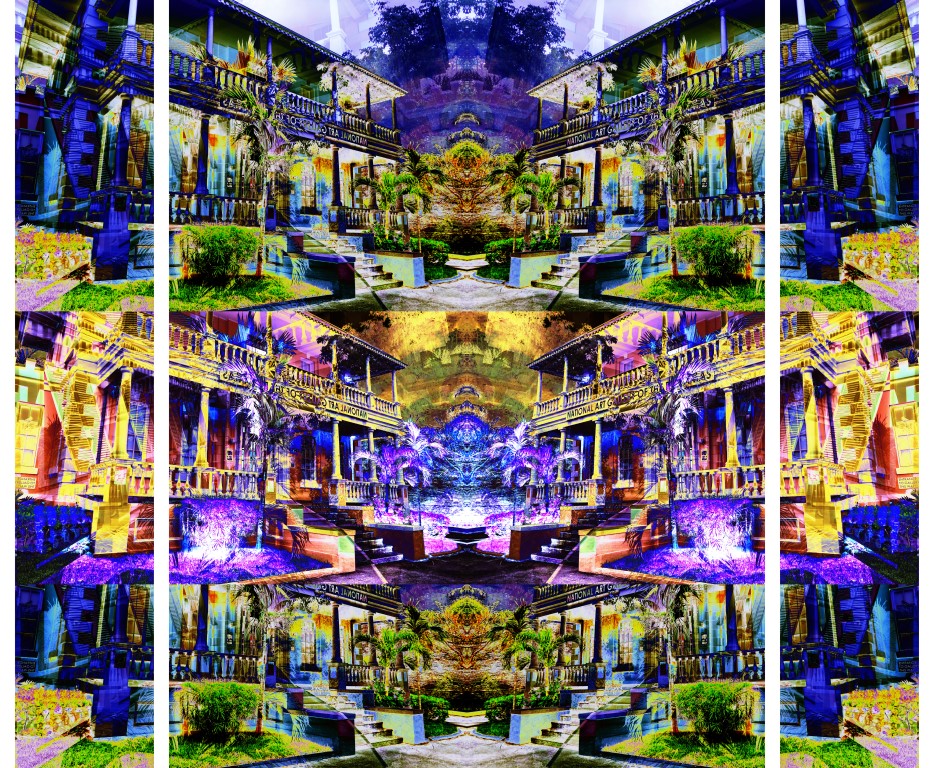 "NAGB I - Blue & Yellow" portrays Villa Doyle, home to The National Art Gallery of The Bahamas in Nassau, in Caribbean colors.

THE IMPRESSIONS of INDIA

In 2017 Karoliina visited the incredible India. This image depicts the Jal Mahal aka Water Palace at Man Sagar Lake in Jaipur, the capital of Rajasthan. At the background are the amazing Aravalli mountains. The structure of the foreground / lower part of this impressionism inspired image is mainly constructed of plastic waste. 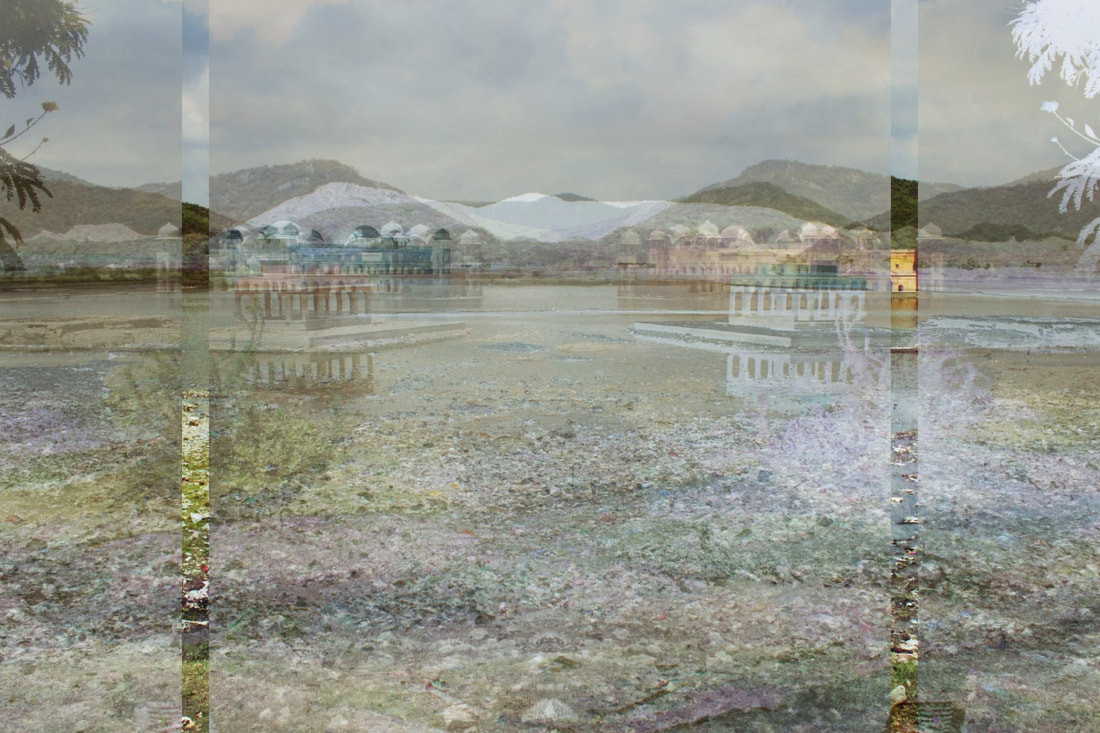 Aesthetics is the key factor in Karoliina's art. Soulfulness and a sense of a place, time and atmosphere are also characteristic to her works. She loves the beauty of parks, gardens and architecture, one of mankind's greatest achievements. Architectural portraits and layered images depicting trees, branches and park views are her trademarks.

"The incredible architect Frank Lloyd Wright said: 'Architecture is life, or at least it is life itself taking form...' and I must agree. I call my artworks architectural portraits, since I feel that I'm capturing in my shots the spirit and essence of a building or even a part of a city, much like if I'd be creating a piece of visual art depicting a person or taking a family portrait. There is great beauty in architecture - and a sense of history. Within my works I always try to find a unique way to depict a building and it's character weather it's a house, a mansion, a palace, a church or a skyscraper."

Through her art Karoliina turns photographic reality into mystical fairytale worlds and bright pop-art pieces. In addition to an exceptional eye for colors and light, dynamic compositions are definitely Karoliina's strongsuit.

In addition to creating photography art Karoliina also writes poems and songs. Her first poetry book Satumaisia kaupunkeja (Fairytale Cities) was published in 2018. All the poems are based on Karoliina's photography artworks.

"Frank Lloyd Wright has also said that great architecture is poetry. These different artforms; architecture, photography and poetry intertwine within my works. Cities and buildings inspire me endlessly and I transform the poetry of architectural structures into visual portraits and written art." 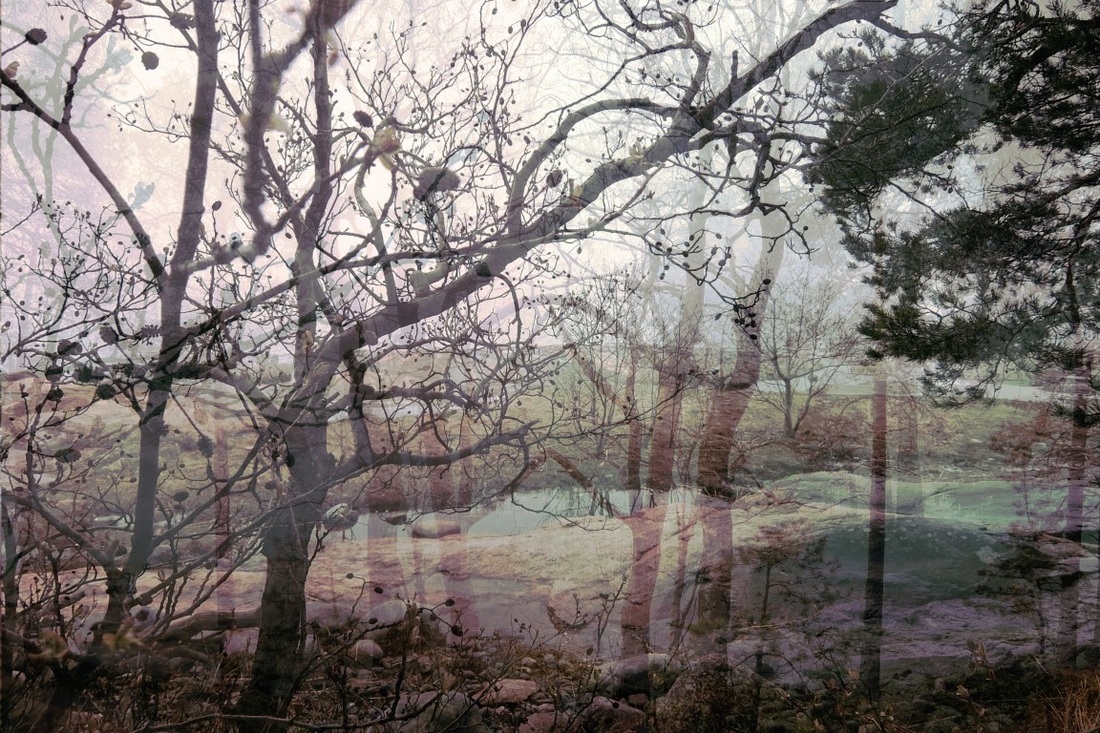 "Magical Forest I" is one of Karoliina's pieces that can be seen as semi-permanent street art in Jyväskylä.
BACK TO THE TOP OF THE PAGE

JUDGE IN A PHOTO COMPETITION

"Stockholm - The Garden of Equilibrium"

"Ainola - Holy Woods"
BACK TO THE TOP OF THE PAGE
Copyright of all artworks & text: Karoliina Veijo